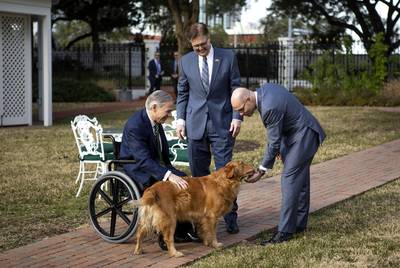 This isn’t going the way you might have expected after that session-starting “Kumbaya” news conference.

The state’s top three leaders — Gov. Greg Abbott, Lt. Gov. Dan Patrick and House Speaker Dennis Bonnen — along with the governor’s photogenic dog, assembled on the lawn of the Texas Governor’s Mansion in January and declared they were focused this session on school finance and property taxes.

A few days later, joined by Sen. Paul Bettencourt, R-Houston, and Rep. Dustin Burrows, R-Lubbock, they said the House and Senate would be filing identical bills designed to require voter approval for large local property tax increases. Their starting limit for “large” was 2.5%.

But now, 15 weeks into a 20-week legislative session and four months after a state panel released a study recommending changes to how the state funds public education, the Senate has yet to present a complete school finance bill.

This, from a Texas Senate that customarily front-loads its favorite legislation, sending a long to-do list to the House — usually by the end of March or so — and then complaining the rest of the session about how slowly the deadline-oriented House operates.

Meanwhile, the limits on property taxes are moving — they’ve passed the Senate and are up for consideration in the House this week — but separate efforts to add a noticeable property tax cut are in trouble.

The Senate’s big public education bill, which could finally come up for consideration later today, was filed in the last business hour of the deadline day for filing legislation — and even then, it was filed with blanks where the numbers should go.

If you’re wondering, nope, filing legislation full of blanks is not normal.

The House approved a school finance bill April 3, and it’s sat in a Senate committee ever since. It could be considered this week.

What has passed the Senate — unanimously — amounts to what could be a poison bill for the school finance package: a $5,000 across-the-board pay raise for public school teachers and librarians. It has the advantage of putting some $4 billion in new money into the state’s classrooms. But in its current form, it doesn’t put a dent into the “recapture” system that grabs local property tax money from school districts with more valuable property and sends it to districts with less valuable property.

That’s more commonly known as the “Robin Hood” system, and it’s a leading indicator of the large imbalances in Texas’ funding of public education.

The House version leaves the pay raise decisions mostly to local school officials and significantly lowers the amount of recapture money richer districts send to poorer ones — a feature the supporters think will be popular with property owners.

The House — if its 148-1 vote is the measure — wants to lower recapture, running new money into the school finance formulas in a way that increases the state’s share of public education spending and lowers (at least in theory) what local districts have to spend.

With that 31-0 vote on the teacher pay raise, the Senate has put its money elsewhere. Privately, some senators have said they prefer the House approach. But publicly, that vote finds the senators in their customary pose on the collar end of a leash that has Patrick on the handle end.

It’s difficult, because it is expensive, to achieve both the across-the-board pay raises and the big cuts to recapture. It’s also difficult, because of the politics, to get lawmakers to divide their allegiances to property owners and educators. And it’s impossible to reconcile those two ideas if the House and Senate don’t advance all of this legislation to the stage where the differences get settled.

There’s another player here — the governor — who hasn’t visibly cracked the whip and whose history during the last two legislative sessions doesn’t suggest that kind of action. If the gears finally turn this week — that is, if the Senate un-stalls the education bill and the House votes out the property tax bill while there is still time in the session to iron things out — maybe Abbott won’t have to do anything but watch.

That seemed more likely back on that idyllic day on the lawn at his official residence.

Analysis: Why cable companies and Texas cities are duking it out at the Capitol

Analysis: Making friends and influencing people in the Texas Legislature

Analysis: Can Texas Republicans raise the sales tax without suffering a backlash?