Latest News
Home /Blog/Confrontation Can Be Hard, But It’s Worth It 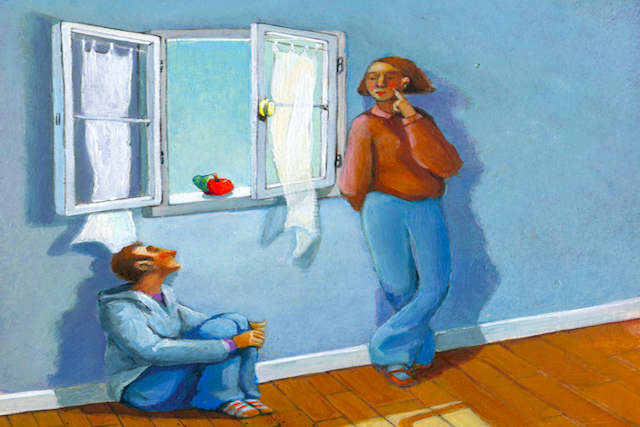 “When we can talk about our feelings, they become less overwhelming, less upsetting, and less scary.” ~Fred Rogers

I was immediately uncomfortable when the older gentleman rode up on his bike and loudly told us that our kids shouldn’t be riding their bikes on the velodrome; it was against the rules.

If it had been just me and my daughter, I would have said no problem and left the area, maybe even apologized. But I wasn’t alone, I was with my friend and her son, and my friend doesn’t back down from confrontation like I do.

Instead of saying okay to him, she pressed him to explain himself. Where was the sign that said the kids couldn’t be riding their bikes (as this man was)? What was the issue?

As I stood by uncomfortably, the two of them hashed things out. She turned to her son, age five, and told him that if he continued to ride on the tilted area of the track, this man might accidentally run into him, and asked if he understood that. Her son nodded his head.

Suddenly, in the midst of the conversation, the man softened. He said he was just worried about hurting the kids, he wasn’t really mad, and soon he started coming up with suggestions for how the kids could stay safe. He said he’d call out before he got to where they were on the track, and then pointed out a blue line where, were they to stay below it, they would be safe, as he’d ride above it.

The kids repeated the options, and my friend thanked the man for working with us to come up with a solution, then rode off. Each time he came around the track (he was much faster than our kids!), he’d yell out, and my friend’s son would get out of the way. My daughter chose to stay low, below the blue line, so she wasn’t in his way.

This interaction may seem like nothing to you, but to me it was a big deal. Confrontation had been a very scary thing for me, something I avoided at all costs. The idea that my friend could not only stand up to confrontation, but elicit such a warm response from the person whom she was confronting left a huge impression on me.

At that moment, I decided it was time for me to stop avoiding conflict. Lucky for me, I was almost immediately presented with many opportunities to prove to myself I could do it.

First, I found out that a neighbor had an in ground pool with no fence around it. This made me feel uneasy (you know, because I have a five-year-old), and I felt like I at least needed to talk to him about it.

You would be astonished at how nerve-wracking this was for me, but I knew I wanted to start talking to people, even when I was scared.

The same day I decided I needed to speak to him, I got my chance. I was driving down the street, and there he was, walking. I pulled over and rolled down my window.

I expressed that I hadn’t realized until the day before that his pool didn’t have a fence, and asked him if he’d ever considered putting a fence up.

He said no, he’d had the pool built long before there were any regulations. I told him my daughter couldn’t swim yet and it made me nervous he didn’t have a fence. He acknowledged my concerns (though he wasn’t interested in building a fence), and then we parted ways.

I made some calls to the local building and zoning departments, but apparently in the town where I live there aren’t any ordinances that would force my neighbor to build a fence, as he had hinted.

The outcome of this encounter may not have been ideal, but I had to consider this a win. At least I’d spoken up and expressed my concerns, which I wouldn’t have done in the past.

My next opportunity to express myself was at a kid’s birthday party, which was being held at a community pool. (Who knew pools caused so many confrontations!)

This would have been the perfect opportunity to confront the perpetrator, but my friend beat me to it, getting up out of her seat and marching over to the offender.

It did not go well. I won’t get into the details, but she was called an offensive slur and a lifeguard ended up getting involved.

It was during this incident that I was reminded why confrontation is so scary for me—what if someone gets mad at me?? However, I also saw that saying nothing meant being treated in a way that made me and everyone around me upset and uncomfortable, and no one should sit in silence in that sort of situation, even if it’s as minor as getting splashed at a pool.

My third opportunity for confrontation came in my marriage, and I’m happy to say this one turned out very well, much better than the previous two encounters.

My husband and I had been agitated, both in general and at each other, for a few days. One Friday morning we started talking about things and both ended up even more irritated, and our conversation ended with him making a comment about how I should (or rather, should not,) spend my money.

Later in the morning, once we’d both had time to process things and my husband was at work, I called him.

I told him all the ways I felt and all the ways I thought things were being mishandled in our relationship. By the end of the talk he was the one being proactive, suggesting that we needed to start carving out a block of reconnection time right after our daughter went to bed each night. He also apologized for his comment about the money.

Confronting him about our disagreement and actually bringing into the light the things that were bothering me has made an enormous difference in our relationship. Since then I’ve felt confident in expressing how I feel at the moment I feel it, and he’s been incredibly receptive. I’m also more receptive to hearing feedback from him.

I’ve had one other opportunity for confrontation since that day at the park, and this time it was regarding my daughter. And speaking up made me cry, but I’m glad I did it anyway.

I had to take her to the dentist, something neither of us enjoys very much. I’m not a huge fan of this particular dentists’ office, but there aren’t many pediatric choices in my area.

Admittedly, I was already not in a great headspace when we arrived at the appointment. We were taken to the back, and my daughter was asked to get up into the chair.

The hygienist immediately started talking about how my daughter was going to have pictures taken (X-Rays), and then quickly started working on her teeth.

My daughter starting crying at that point—she cries every time we go to the dentist. Have I mentioned she’s five?

And then the hygienist started saying, over and over, “You don’t have to cry, stop crying, you don’t need to cry, don’t cry.” I came over and held my daughter’s hand and rubbed her leg, but the hygienist kept working and kept telling my daughter not to cry.

This was really making my blood boil. If there’s one parenting tenant my husband and I stand by, it’s to let our child express and feel her feelings.

This, coupled with the hygienist’s continued insistence that my daughter needed x-rays, but without discussing it with me first, pushed me over the edge.

I started asking many, many questions about the necessity of the x-rays. As she answered with vague, boilerplate responses, I continued to feel frustrated, and realized I needed to tell her the thing that was really bothering me: Stop telling my daughter not to cry.

She got defensive, and now it was my turn to start crying. I’m still new at this confrontation thing, and upsetting people, even when I disagree with them, makes me feel upset.

I pressed forward, though, and told her that in our house, my daughter was allowed to express her emotions, even uncomfortable ones. I also told her I wanted to speak to the dentist about the x-rays and make my own choice about them.

Later in the appointment, once I’d spoken to the dentist, my daughter was back in the chair getting the final treatment from the hygienist. She started to tear up again, and this time when the hygienist started to tell her not cry, she stopped herself. I considered that a win.

Confrontation is really, really hard. For me, at least.

I think it’s worth it, though. In just the month or two since I was inspired to start facing conflicts head on, I’ve improved my relationship with my husband and proven to myself that I’m willing to stand up for my child, which makes me feel like I’m being the mom I want to be.

I think in order to start confronting others, you need a bit of bravery and a bit of a plan.

You have to decide that you’re actually willing to talk to others, even if it’s going to be uncomfortable. Instead of making up random excuses in your head, you have to silence those fears and just go for it, no matter how worried you are about the outcome.

My experience has shown me that it’s best to have a conversation when you’re calm, although that’s not always possible. When it is possible, though, I think being calm allows you to have perspective on the issues you really care about and have a clear vision of what you’re hoping to get out of the confrontation.

In fact, I think that might be one of the most important factors to consider if you decide to take this on: What are you trying to achieve? Confrontation just for the sake of confrontation is pointless; you must have a reason to speak up.

Once you’ve got a goal, you can decide what points you’d like to cover. This is, once again, assuming you’re able to pre-plan the confrontation.

But what if you’re not? What if it sneaks up on you?

Well, I think you have to do what I did at the dentist. You have to speak your truth in that moment, even if you cry. Yelling is acceptable, too, of course, though that may make it harder for the person to whom you are speaking to really take in what you’re saying.

Remembering what you hope to get out of this is the most important thing, though. What’s your goal?

In the end, anything that allows you to express what’s inside you is worth it. Even if you can’t get that fence built.

Jen Picicci is an artist, writer, and teacher living in the mountains of Western North Carolina. She’s currently obsessed with creating whimsical watercolor landscapes and teaching women how to hear their own inner wisdom. To see her art, follow her on social media, or take her self-study Inner Guidance 101 class, visit www.JenPicicci.com.

The post Confrontation Can Be Hard, But It’s Worth It appeared first on Tiny Buddha.