Introduction: In this article, Gena Philibert-Ortega urges family historians on Veterans Day to interview their family’s veterans to preserve their stories. Gena is a genealogist and author of the book “From the Family Kitchen.”

Pursuing a family history means that you will have regrets. It’s inevitable. Many researchers wish they were interested in genealogy when they were younger. Some lament they didn’t cite their sources when they began their search. One of their biggest regrets is not asking questions of the older generation when they had the chance. 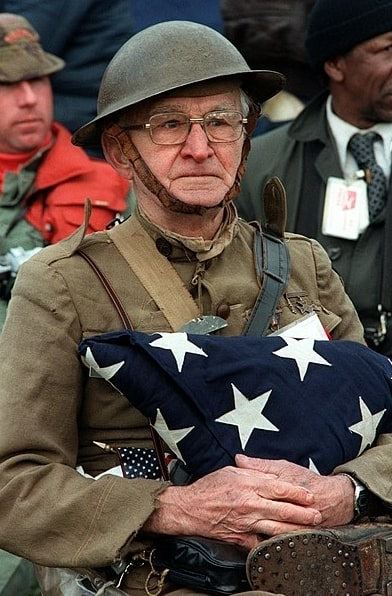 Photo: Joseph Ambrose, an 86-year-old World War I veteran, attends the dedication day parade for the Vietnam Veterans Memorial in 1982. Wearing a doughboy uniform like the ones used during the war, he is holding an American flag. It covered the casket of his son Clement, who was killed in the Korean War. Credit: Department of Defense. Defense Audiovisual Agency; Scene Camera Operator: Mickey Sanborn.

Veterans Day reminds me of one of my genealogy-related regrets. I regret I didn’t interview my dad about his Vietnam-era military service when I had the chance. Yes, we do know some information about that service via his grandsons, who asked questions. I have his DD214. I even have a scrapbook that he kept that includes a few photos he took during his time in the military. But because I, like so many others, wrongly believed there was time, I didn’t ask the questions I should have while he was alive.

In the United States, Veterans Day falls on November 11th each year. This date was chosen because World War I ended on 11 November 1918. Originally called Armistice Day, it commemorated that occasion and honored the veterans who served and died in the “Great War.” 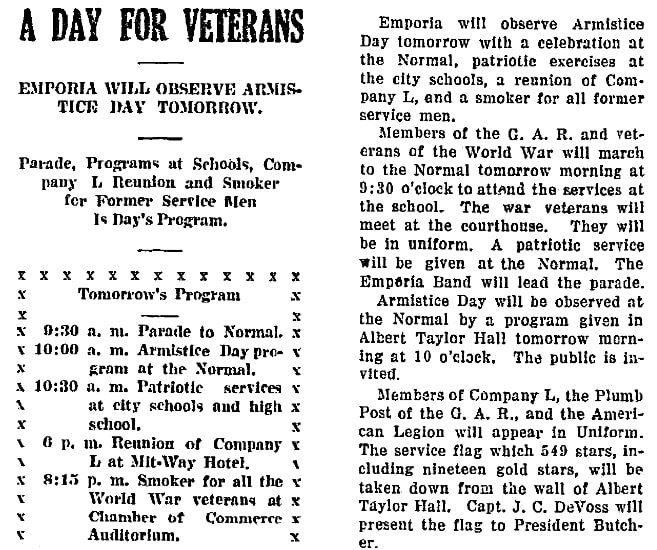 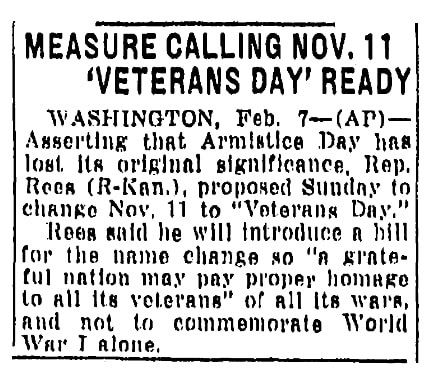 One way to honor that service is to document the lives of our family’s veterans. Take some time to ask a few questions. Go over photographs and scrapbooks. Ask about their experience. It can be intimidating to interview someone about military service if you are not familiar with it, but think of questions you would want to know – such as:

If you enlisted, what made you want to do so? Where did you enlist?
Why did you want to serve your country?
If you were drafted, what was that experience like? How did that work?
Where did you attend boot camp? What did you do during your training?
What jobs did you have?
What rank/s were you?
What places did you travel to during your military career?
Did you see combat?
What was everyday life like?
Do you have any paperwork from your time in the military?

You can prepare for your interview by reviewing online military oral history projects. This also might be an opportunity to not just save the interview for your family, but preserve it for its historical value.

The Library of Congress’ Veterans History Project includes forms and sample interview questions. A FAQ section explains the project and how to participate.

These interviews can also be found on other websites for organizations that assisted in collecting the interviews. such as the New York Public Library and the University of Maine.

The Betty H. Carter Women Veterans Historical Project “documents the contributions of women in the military and related service organizations since World War I. The WVHP includes a wide range of source material including photographs, letters, diaries, scrapbooks, oral histories, military patches and insignia, uniforms, and posters, as well as published works.”

A well-known oral history project is StoryCorps. “StoryCorps’ mission is to preserve and share humanity’s stories in order to build connections between people and create a more just and compassionate world.” You can search for veteran interviews via the website search engine or learn more about their Military Voices Initiative, which “provides a platform for veterans, service members, and military families to share their stories.”

The Time Is Now

Oral histories are an important aspect of preserving our family histories. Don’t spend all your time researching the dead while neglecting to document the story of the living. Veterans Day is the perfect opportunity to take some time and ask questions of the veterans in your family. And if you are the veteran, start writing your story so that others may benefit from it. Future generations will thank you.

Thank you for your service. Happy Veterans Day!