Airport Authority of India’s (AAI) deputy manager Amit Kumar and assistant general manager Neeraj Gupta expressed satisfaction over the conditions in Adilabad district centre to set up an airport. They visited an area earmarked for aerodrome and studied the feasibility of establishing the facility on Wednesday.

Speaking to media, the officers said the condition of the land and the town was favorable for setting up an airport. The officers have said they would submit a primary report over the feasibility of an airport to the AAI in a month, and considering the merits, a detailed project will be sent to the State government within six months. 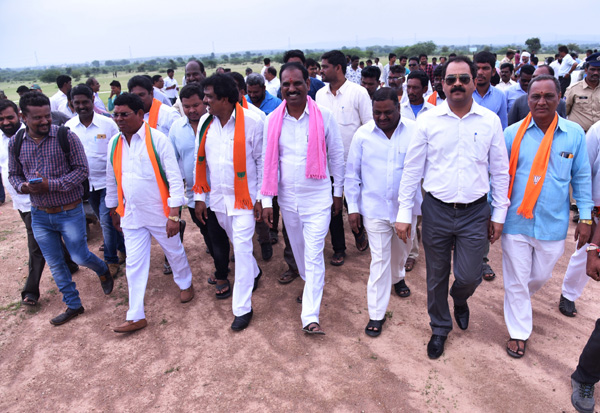 Authorities of AAI visit a piece of land situated on Ankoli road in Adilabad for studying feasibility to set up an airport, on Wednesday

Soyam Bapu Rao, Rathod Janardhan and Bhuma Reddy apprised the officers of the need to have an airport in the Adilabad district headquarters. They said that the facility would help the backward district to grow in many facets and allow citizens to fly to major cities, tourist spots and pilgrim centres and foreign countries as well.

Meanwhile, Adilabad MLA Jogu Ramanna submitted a letter to the authorities of AAI seeking setting up of a mini aerodrome to provide air connectivity to the people of Adilabad through which they could travel to religious centre and foreign nations without depending on Hyderabad and Nagpur, located 300 kilo metres away.

“People are forced travel in trains in order to reach religious centres located outside Telangana. Similarly, businessmen from Adilabad town frequent Nagpur, Hyderabad and Mumbai. The air connectivity will be a boon in case of medical emergencies. Tourism sector of erstwhile Adilabad district will flourish with the setting up of an airport,” he mentioned in the letter.

The visit of the authorities of AAI rekindled of hopes of locals. It is likely to realise the long pending dream of people of the district to fly to different parts of India and abroad. The State government had recently decided to set up six air ports in Telangana and entitled the job of studying to the authority.

An aerodrome was established in 369 acre landscape on peripherals of Adilabad town by the then Nizam of Hyderabad in order to fill fuel for fighter aircraft proceeding to battlefronts in 1930. It had come under the control of Indian Air Force following the independence to the country in 1947. It was used as a re-fueling point again for helicopters used for training pilots till late 1970s.

In 2014, the IAF proposed to convert the aerodrome into a full-fledged Air Force Station and asked the district administration to identify adequate land for this purpose. Accordingly, 1,600 acres of land was identified by the authorities concerned under the limits of Kachkanti,
Khanapur, Thantoli and Anukunta villages abutting the existing aerodrome in 2017. However, there is no headway in the proposal for reasons unknown.

Now you can get handpicked stories from Telangana Today on WhatsApp / Telegram everyday. Click these links to subscribe and save this number 9182563636 on your contacts.