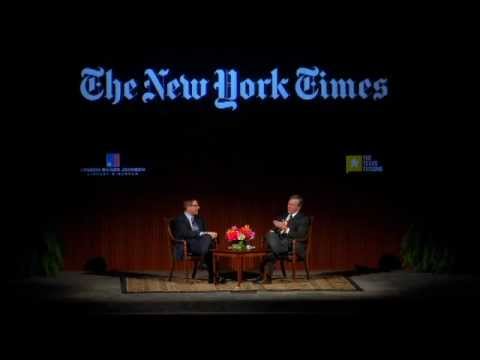 When I was a kid in the 1960s — soon after the cooling of the Earth’s crust — I was a big fan of the The Rocky and Bullwinkle Show. My favorite feature was the show within the show entitled “Peabody’s Improbable History,” in which the WABAC machine transported the brilliant Mr. Peabody (a dog, actually) and his boy Sherman (an actual boy) into the past to have wonderful adventures.

At two points in my life I have been a fan of the BBC Doctor Who series — especially Tom Baker as Doctor No. 4 and Peter Capaldi as No. 12.

So this time travel thing is a useful concept, methinks, even when dealing with trends in postmodern journalism. You’ll see that (or hear it) during this week’s “Crossroads” podcast (click here to tune that in). In this particular post we will be making four stops, although we could make a dozen.

Turn on the WABAC machine and tell me — as a reflection on the latest editorial explosion in the New York Times newsroom — who said or wrote the following (don’t click the link yet) after debates about fair and accurate coverage of what event?

As we reflect on the momentous result, and the months of reporting and polling that preceded it, we aim to rededicate ourselves to the fundamental mission of Times journalism. That is to report America and the world honestly, without fear or favor, striving always to understand and reflect all political perspectives and life experiences in the stories that we bring to you. It is also to hold power to account, impartially and unflinchingly. You can rely on The New York Times to bring the same fairness, the same level of scrutiny, the same independence to our coverage of the new president and his team.

That, of course, was part of a letter from New York Times publisher Arthur Sulzberger Jr., and executive editor Dean Baquet — responding to complaints that their newspaper had botched coverage of the 2016 White House race and the rise of Donald Trump.

How do those words hold up right now?

The key issue, according to Times public editor Liz Spayd, was whether America’s most influential newsroom was interested in doing accurate, informed, fair-minded coverage of roughly half of the American population. See this column, in particular: “Want to Know What America’s Thinking? Try Asking.” Here is a key chunk of that:

Readers are sending letters of complaint at a rapid rate. Here’s one that summed up the feelings succinctly, from Kathleen Casey of Houston: “Now, that the world has been upended and you are all, to a person, in a state of surprise and shock, you may want to consider whether you should change your focus from telling the reader what and how to think, and instead devote yourselves to finding out what the reader (and nonreaders) actually think.”

Another letter, from Nick Crawford of Plymouth, Mich., made a similar point. “Perhaps the election result would not be such a surprise if your reporting had acknowledged what ordinary Americans care about, rather than pushing the limited agenda of your editors,” he wrote. “Please come down from your New York City skyscraper and join the rest of us.”

Now, prepare for our second stop.

Who said or wrote this, and when? This is a discussion of news coverage of religious and cultural issues, including gay rights, abortion, etc.

… If you think The Times plays it down the middle on any of them, you’ve been reading the paper with your eyes closed. … If you’re examining the paper’s coverage of these subjects from a perspective that is neither urban nor Northeastern nor culturally seen-it-all; if you are among the groups The Times treats as strange objects to be examined on a laboratory slide (devout Catholics, gun owners, Orthodox Jews, Texans); if your value system wouldn’t wear well on a composite New York Times journalist, then a walk through this paper can make you feel you’re traveling in a strange and forbidding world.

Here’s another famous quote from this broadside:

… For those who also believe the news pages cannot retain their credibility unless all aspects of an issue are subject to robust examination, it’s disappointing to see The Times present the social and cultural aspects of same-sex marriage in a tone that approaches cheerleading.

That’s from the famous 2004 commentary by then public editor Daniel Okrent entitled “Is The New York Times a Liberal Newspaper?”

That column had legs, as the saying goes, and it was part of the discussion at our next stop.

Now this item has been quoted so many times here at GetReligion that there’s no way, or need, to play games with it. This is from the 2011 appearance at the Lyndon Baines Johnson Library in Austin, Texas, by Bill Keller, only days after he ended his work as editor of The New York Times.

This next WABAC passage is from one of my “On Religion” columns, entitled, “God and The New York Times, once again.” The key: Keller was asked, by the forum moderator, whether the Times was a liberal paper. With a nod back to Okrent’s famous words, Keller said it was certainly important that the cultural context for his newsroom’s work was urban, sophisticated and skeptical.

“We’re liberal in the sense that … liberal arts schools are liberal,” Keller noted. … “We’re an urban newspaper. … We write about evolution as a fact. We don’t give equal time to Creationism.” …

Keller continued: “We are liberal in the sense that we are open-minded, sort of tolerant, urban. Our wedding page includes – and did even before New York had a gay marriage law – included gay unions. So we’re liberal in that sense of the word, I guess. Socially liberal.”

Asked directly if the Times slants its coverage to favor “Democrats and liberals,” he added: “Aside from the liberal values, sort of social values thing that I talked about, no, I don’t think that it does.”

So at that stage of the game, the top Times editor was saying that his paper was still playing things straight politics — but not all that religious, cultural and moral stuff. And what kinds of NON-political (my emphasis) issues were affected by this “aside from” credo?

As I stated in my column: “Any list would include sex, salvation, abortion, euthanasia, gay rights, cloning and a few other sensitive matters that are inevitably linked to religion. That’s all.”

In other words, Keller was saying that his newsroom already leaned left on many, if not most, of the issues that have bitterly divided American voters, especially when those issues have been weaponized by connections with who gets to sit in what chairs on the U.S. Supreme Court.

So where are we now? Who said or wrote the following, concerning the past two weeks of life in urban America?

That, of course, is the key passage in the Times op-ed by GOP Sen. Tom Cotton of Arkansas, a Harvard Law graduate who served with honors in Iraq and then in the Old Guard at Arlington National Cemetery.

Cotton was drawing a bright red line between the rights of protesters — protected, for sure — and the illegal activities of rioters and looters.

In other words, he wrote the opposite of what choirs of Times newsroom professionals would say that he wrote during a revolt that led to this gleeful headline at The New York Post: “Leftists are in firm control at The New York Times.” Michael Goodwin declared:

Last week’s developments amounted to a hostile takeover of the paper, as a friend put it. It’s an apt description because the 800 staff members who objected to the publication of Cotton’s support for using the military to quell the riots declared their hostility to the fundamental traditions of journalism.

Previous op-ed pieces from American adversaries — including Vladimir Putin and the Taliban — brought no such staff complaints. Nor did one from Turkey’s strongman, ­Recep Tayyip Erdogan, the world leader in locking up journalists. But Tom Cotton, an American senator, was beyond the pale.

So one final comment/question, draw from this new “Crossroads” discussion: Is “leftist” the right word for what is happening here? How about “liberal”? In this context, what does “progressive” mean?

One thing is certain, if you pause and think at each stop in this WABAC journey: This is not a new discussion. The Times has been headed this way — all but openly — for quite some time, especially on issues directly linked to religious faith, public life and the First Amendment.

Enjoy the podcast and, please, pass it on to others.