Latest News
Home /Blog/On This Day: The Opening of the Berlin Wall

It stood for 28 years, as grim and ugly a symbol of Cold War tensions as any object on the planet: the Berlin Wall. Then, with a dizzying speed that must have made the heads of technocrats in the Soviet Union and East Germany spin, the forbidding barrier was suddenly opened on 9 November 1989. A stifling age of repression and control was over, and East and West Berliners streamed together to laugh, cry, pop champagne bottles and dance atop the hated – but no longer feared – Berlin Wall. 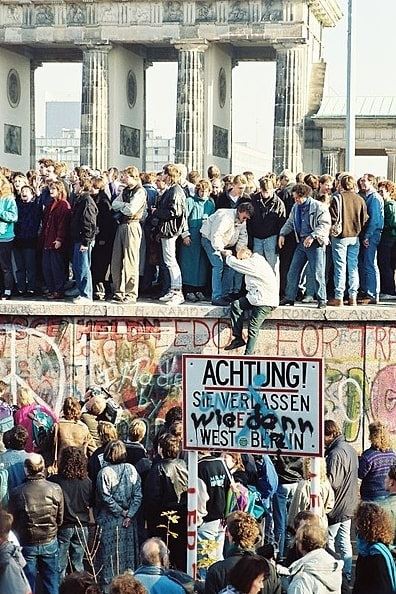 Photo: people atop the Berlin Wall near the Brandenburg Gate on 9 November 1989. The text on the sign “Achtung! Sie verlassen jetzt West-Berlin” (“Notice! You are now leaving West Berlin”) has been modified with an additional text “Wie denn?” (“How?”). Credit: Sue Ream; Wikimedia Commons.

East Germany (the German Democratic Republic), under the control of its Soviet masters, constructed the Wall in August 1961 to prevent East Germans from crossing into West Berlin to escape the autocratic control of communism. Armed with barbed wire, towers and guards with orders to capture or shoot trespassers, the Berlin Wall was an effective tool of the totalitarian state to stop emigration.

It did not prevent everyone from risking their lives to gain freedom, however. From the day it was constructed to the day it was finally opened, it is estimated that over 5,000 East Germans tried to escape over the wall – and more than 100 were killed. 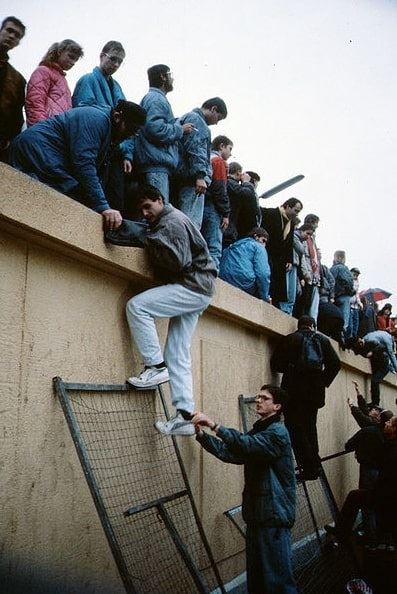 The world was changing rapidly in 1989, especially in Soviet-dominated countries such as Hungary and Poland. During that summer East Germans publicly protested in large numbers to demand similar reforms in their own country – at least those who weren’t busy trying to escape through Czechoslovakia, Hungary and Poland.

The writing on the wall, figuratively and literally, came on October 18 when longtime strongman Erich Honecker resigned as East Germany’s leader. On November 4 more than 500,000 East Germans gathered in a public square in East Berlin to demand change. 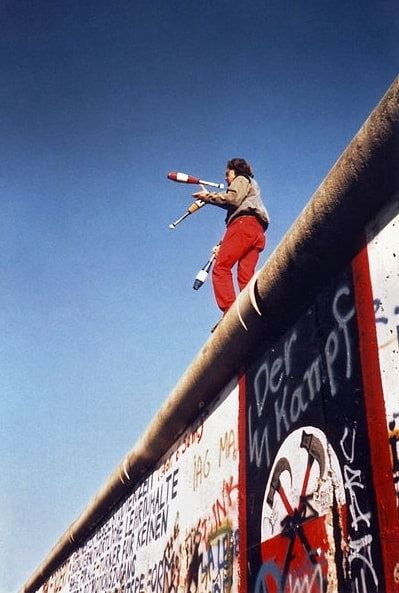 Their demands were met five days later. On 9 November 1989, the Berlin Wall and all other East German checkpoints were opened, giving anyone who wished to leave immediate access to West Germany and the freedoms it offered. East German officials made the decision on November 9 – to go into effect the next day – but a confused East Berlin official said at a news conference that the change was “effective immediately” and the stampede was on.

Thousands of wary but excited East Germans gathered at the Wall and at six checkpoints while bewildered guards nervously clutched their guns and wondered what to do. At 10:45 that night the checkpoints were suddenly thrown open, and the joyous scenes described in the following news article erupted. East and West Germany were formally reunified on 3 October 1990. 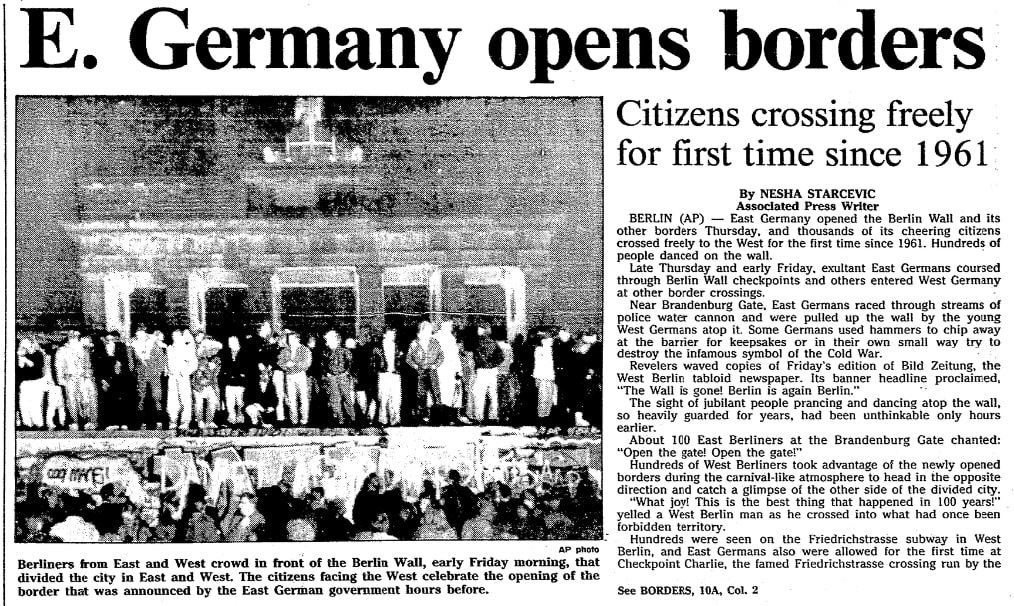 Here is a transcription of this article:

BERLIN (AP) – East Germany opened the Berlin Wall and its other borders Thursday, and thousands of its cheering citizens crossed freely to the West for the first time since 1961. Hundreds of people danced on the wall.

Near Brandenburg Gate, East Germans raced through streams of police water cannon and were pulled up the wall by the young West Germans atop it. Some Germans used hammers to chip away at the barrier for keepsakes or in their own small way try to destroy the infamous symbol of the Cold War.

The sight of jubilant people prancing and dancing atop the wall, so heavily guarded for years, had been unthinkable only hours earlier.

Hundreds of West Berliners took advantage of the newly opened borders during the carnival-like atmosphere to head in the opposite direction and catch a glimpse of the other side of the divided city.

“What joy! This is the best thing that happened in 100 years!” yelled a West Berlin man as he crossed into what had once been forbidden territory.

Hundreds were seen on the Friedrichstrasse subway in West Berlin, and East Germans also were allowed for the first time at Checkpoint Charlie, the famed Friedrichstrasse crossing run by the Allied military.

Many hugged and kissed strangers, while cars packed with East Germans and others paraded down the streets of West Berlin.

“It’s crazy! It’s crazy!” shouted one young man as he sat in the back seat of a car with his parents after a brief trip past the once-impenetrable Berlin Wall.

His parents said they just wanted to see the West – and then drive back. They declined to give their names.

“We heard it on TV, we just decided to go over and have a look,” said the young man’s father. “We want to show our son a little bit of Kurfuerstendamm.”

The Kurfuerstendamm is one of Europe’s most elegant shopping strips. For decades, East Germans locked up behind the now-crumbling Iron Curtain could only dream of seeing it.

All apparently were arriving without visas, although visas technically were necessary under regulations announced earlier Thursday. A spokesman for the West German border police in Braunschweig said the East Germans had been allowed over the border there without visas.

East German radio announced that East Germans would be required to get a visa for such trips beginning Friday morning.

With decades of fortified frontiers apparently at an end, the wall that for decades represented the literal division between the East and West may become a mere monument to the Cold War.

Since it suddenly appeared during an August night 28 years ago and East Germany’s borders were sealed, 191 people are known to have died while fleeing to the West.

President Bush said if East Germany makes good on its promise to allow free emigration, “this wall built in ’61 will have very little relevance.”

The White House announced later that Bush had ordered U.S. military units in West Germany to give “all possible assistance” to the West German government, which is struggling to cope with a flood of East German refugees. The Pentagon said it was making available housing for 980 people in three off-base installations.

The surprise move to open the borders came at a Central Committee meeting Thursday.

Egon Krenz, East Germany’s new leader, also advocated a law Thursday that would ensure free and democratic elections in his communist nation, which has been disrupted by pro-reform demonstrations and weakened by mass flight to the West.

The Central Committee scheduled a Communist Party conference – the first since 1956 – for Dec. 15-17.

More than 200,000 East Germans, nearly 1½ percent of the nation’s 16½ million people, have left so far this year – 50,000 since Saturday alone. Most are young, skilled workers vital to the economy.

Hundreds of thousands of people who stayed home have filled the streets to demand democratic reforms and an end to 40 years of rigid one-party rule.

Earlier Thursday, Guenter Schabowski, a member of the ruling Politburo, said the borders were being opened until a law was passed to allow East Germans greater freedom of travel.

Schabowski did not say when the law would be passed. He also said East Germany was not yet ready to remove all its barriers.

The Central Committee decision means all East Germans “can travel over all East German border checkpoints,” including through the Berlin Wall, Schabowski told reporters.

He said those seeking to emigrate could go to West Germany directly without having to pass through a third country. East Germans have fled through Hungary, Poland and Czechoslovakia.

Anyone merely wanting to visit the West would need a visa, Schabowski said, but they should be issued quickly. 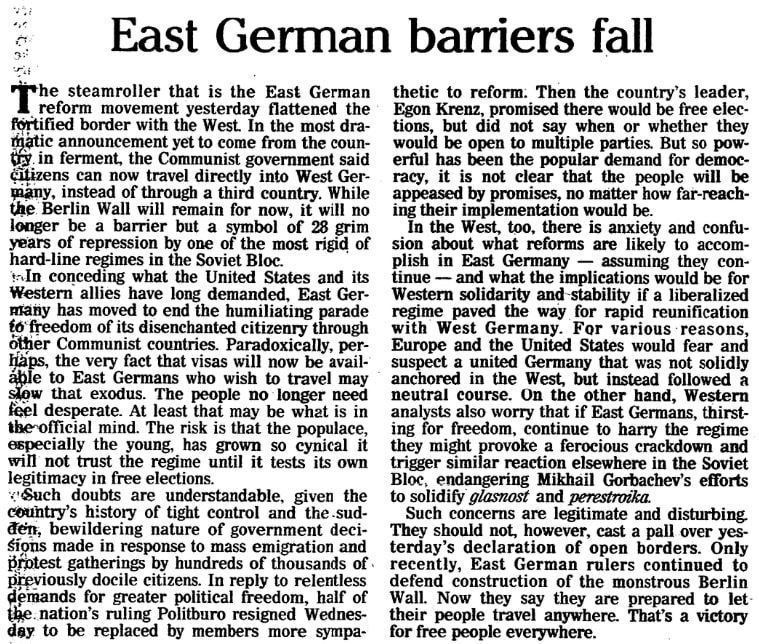 Here is a transcription of this article:

The steamroller that is the East German reform movement yesterday flattened the fortified border with the West. In the most dramatic announcement yet to come from the country in ferment, the Communist government said citizens can now travel directly into West Germany, instead of through a third country. While the Berlin Wall will remain for now, it will no longer be a barrier but a symbol of 28 grim years of repression by one of the most rigid of hard-line regimes in the Soviet Bloc.

In conceding what the United States and its Western allies have long demanded, East Germany has moved to end the humiliating parade to freedom of its disenchanted citizenry through other Communist countries. Paradoxically, perhaps, the very fact that visas will now be available to East Germans who wish to travel may slow that exodus. The people no longer need feel desperate. At least that may be what is in the official mind. The risk is that the populace, especially the young, has grown so cynical it will not trust the regime until it tests its own legitimacy in free elections.

Such doubts are understandable, given the country’s history of tight control and the sudden, bewildering nature of government decisions made in response to mass emigration and protest gatherings by hundreds of thousands of previously docile citizens. In reply to relentless demands for greater political freedom, half of the nation’s ruling Politburo resigned Wednesday to be replaced by members more sympathetic to reform. Then the country’s leader, Egon Krenz, promised there would be free elections, but did not say when or whether they would be open to multiple parties. But so powerful has been the popular demand for democracy, it is not clear that the people will be appeased by promises, no matter how far-reaching their implementation would be.

In the West, too, there is anxiety and confusion about what reforms are likely to accomplish in East Germany – assuming they continue – and what the implications would be for Western solidarity and stability if a liberalized regime paved the way for rapid reunification with West Germany. For various reasons, Europe and the United States would fear and suspect a united Germany that was not solidly anchored in the West, but instead followed a neutral course. On the other hand, Western analysts also worry that if East Germans, thirsting for freedom, continue to harry the regime they might provoke a ferocious crackdown and trigger similar reaction elsewhere in the Soviet Bloc, endangering Mikhail Gorbachev’s efforts to solidify glasnost and perestroika.

Such concerns are legitimate and disturbing. They should not, however, cast a pall over yesterday’s declaration of open borders. Only recently, East German rulers continued to defend construction of the monstrous Berlin Wall. Now they say they are prepared to let their people travel anywhere. That’s a victory for free people everywhere.

Note: An online collection of newspapers, such as GenealogyBank’s Historical Newspaper Archives, is not only a great way to learn about the lives of your ancestors – the old newspaper articles also help you understand American history and the times your ancestors lived in, and the news they talked about and read in their local papers. The same is true of more recent news.

The post On This Day: The Opening of the Berlin Wall appeared first on GenealogyBank Blog.