Easter was this Sunday, April 16th, and Good Friday was the 14th, which meant an end to Lent and in Catholic countries like Costa Rica, the end of Semana Santa.

Even though I was raised Catholic and am familiar with a lot of the traditions and meanings behind the holiday in the United States, Easter in Costa Rica (or more importantly, the week leading up to Easter) was a big surprise to me.

Semana Santa, which technically starts the Sunday before Easter, is a national religious week in Costa Rica and in many other Latin American countries. The office where I’m doing my internship closed for the entire week– which is apparently more common in the public and nonprofit sector, but less and less common for everybody else. Children still have off from school and most people have off work on Thursday and Friday.

Just how important the entire Semana Santa is in Costa Rica was a shock itself, but what surprised me the most was that Easter Sunday really doesn’t matter much! Some Catholics I talked to couldn’t even say when Easter was (one asked me if it was around Christmastime). While emphasis in the U.S. is put on the day of the resurrection of Jesus Christ, almost all of the emphasis here is put on Good Friday, the day of his death and burial.

Here are some traditions that I noticed during my first Semana Santa in Latin America!

Like in Spain and in many Latin American countries, Holy Week processions are a big part of celebrating and recognizing the holiday. Costa Rica observes two big processions on Viernes Santo– one in the morning, to reenact the path that Jesus walked to the cross, and one in the evening, to commemorate his burial. Multiple processions happen in every city– usually there will be a man dressed as Jesus, carrying a cross, as well as men and women dressed as Roman soldiers and Biblical women. The procession I saw was in a small town, but it still drew a large crowd and had a police escort that diverted traffic. Men, women, and children attend the processions along with members of the Church to commemorate the death and burial of Jesus.

Since Semana Santa comes with so much time off for students and workers, a lot of families use this time to be together. Depending on how religious you are, that might mean spending time focusing on God and prayer, …or just relaxing at home and watching a lot of Netflix 😎. My host family is very devout, so for Semana Santa they went to more masses and confession services than they usually would, participated in a lot of community volunteering, and had nightly prayer sessions after dinner as a family. My host dad also apparently likes to celebrate by watching movies about the saints– after a week I think I’ve seen every single biographical movie about a Catholic saint that exists.

My host mom also has a tradition of going to her mother’s house with her sisters for one day where they do nothing but bake bread. (Well, bake bread and gossip, according to her.) Which meant I got all the family chisme AND got to eat rolls all week.

I get the impression that, much like in the U.S. and other Western countries, every coming generation gets a little less religious. So here it’s kind of a stereotype of young people that they don’t care about the religious meaning behind Semana Santa and just use the time to party at the beach. (…Which I can’t really argue with since I went to a beach town for the weekend!) It’s pretty much the same thing that’s said about teens during Spring Break in the states, only more intense here because it’s, obviously, a more Catholic country.

That being said the beaches DEFINITELY fill up for Semana Santa. Travel is really popular, and also a pain, because a lot of buses shut down for Good Friday. I talked to a lot of Uber and taxi drivers who said they work through the whole week and make bank (which is good for them but also kind of a shame). 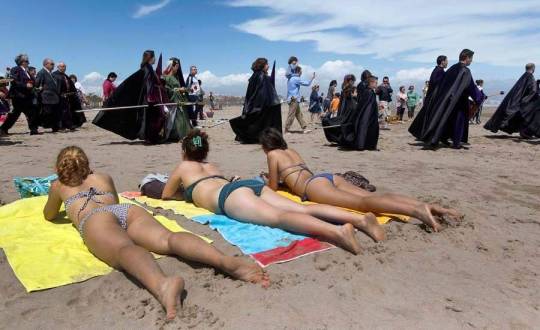 My favorite picture that  sums up the weird disparity of Semana Santa. (Alberto Saiz/AP Photo

Definitely not an experience to miss out on!