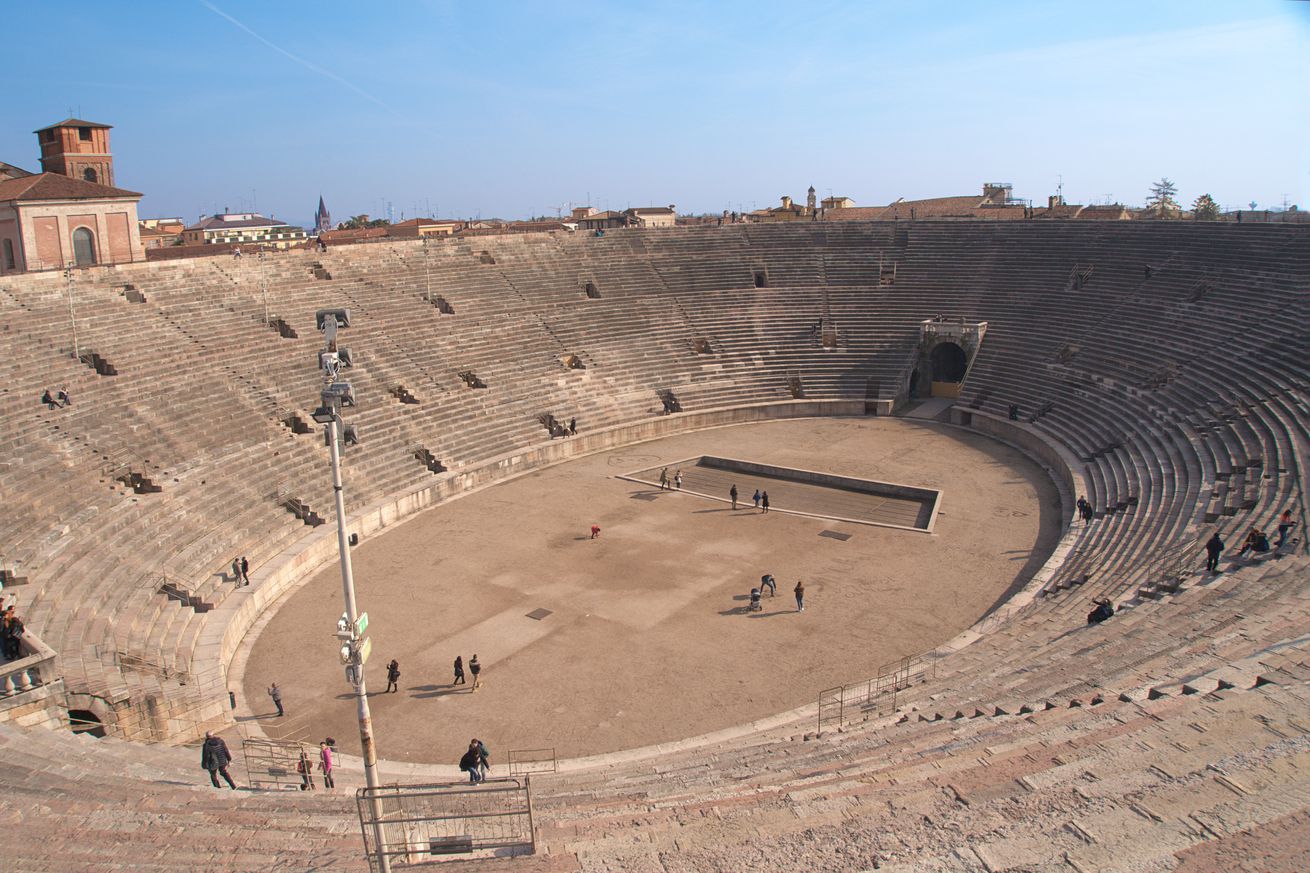 So, I’ve made something of a rod for my own back here. I rolled out a “last stage preview, song lyrics, photos and awards” column for the 2017 Vuelta, and brought it back for the 2018 Tour. I do enjoy writing this columns (and even enjoy getting a shoeing from Civetta for my taste in music) but it works best when there’s no particular interest in the outcome of the stage.

Stage 21 won’t provide that luxury. So this year, we’ll spend a little longer on the preview of a stage that may have some significance, and a little less time on the photos and the silly song – but don’t worry, we’ll get to the stupid pretty soon.

The good news is, I’ve already covered the time trial in my preview for the race’s three chrono stages. A quick reminder of the course for Sunday’s final out-and-back loop: 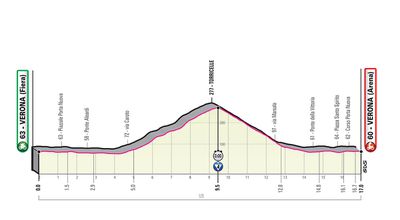 It is in and around Verona and the hills to the north, should you be interested in the geography: 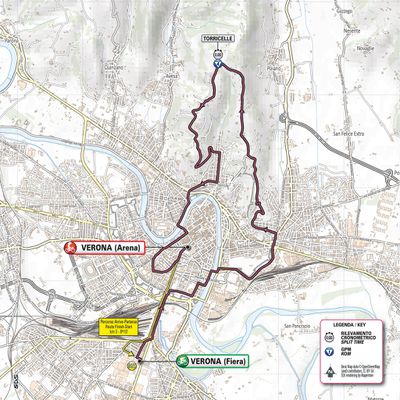 Also, since I mentioned hills, it is only fair to show you exactly what I’m talking about. The pretty steady ascent of the Torricelle is the last climb for a field that must be pretty sick of the sight of them. 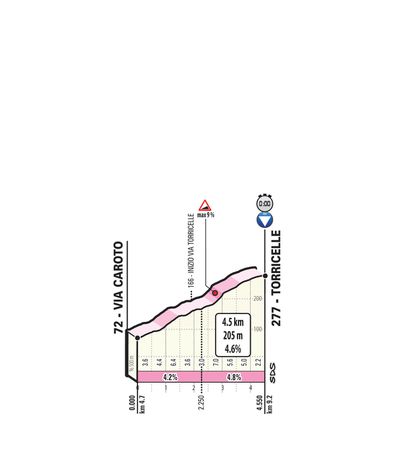 When I commented on this stage three weeks ago, I said that it was “wide open”, and marginally favouring the climbers who can TT, rather than the pure TT engines. I’m sticking with that, with fatigue likely to be strong among the climbers, but motivation also massive for the riders at the pointy end of the race.

One thing I didn’t know about when I sat down to write the preview was the weather. The good news is, we’re expecting a warm, dry and mostly windless day. Unlikely to provide too much drama or give too much of advantage to early or late starters.

Another thing that I didn’t know about was the state of the race. I don’t think we’ll see more than about ninety seconds between the guys who are going for it on this stage. That means that I think, barring catastrophe, Richard Carapaz is safe. It also means I think that the podium is set, as I don’t think Mikel Landa will be able to ride well enough to hold third ahead of Primoz Roglic, despite the latter tiring. I don’t think we’ll see any changes in the youth jersey, and the other jerseys are now finalised.

So, is this going to be anything more than a processional finish? Sure. Positions matter, especially third, and the top ten, and there may be some changes. The hill is big enough to cause trouble, especially for riders on TT rigs. There’s also the little matter of the stage winner. As I said when I last looked at this stage, I think this stage favours the generalist over the TT specialist.

However, Victor Campenaerts came within 11 seconds (and a botched bike change) of winning on stage 9. He’s been scooting around Italy without much exertion whilst Primoz Roglic, already over the top with form, has been exerting himself in and around the lead groups. I think we’ll see Campenearts win, with Roglic taking a few seconds off Landa and Nibali and a few more off Carapaz, but not enough to get higher than the bottom rung of the podium. 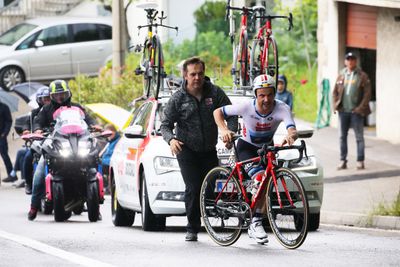 Now for the fun stuff

Which artist to choose? As we’re in Verona’s arena, I really should find something cultured, from a great Italian opera. That isn’t naff enough for my purposes, nor am I linguistically talented enough. Instead, let’s go with something truly cheesy, but also topical given a recent film release. Mostly, I’ve found this song because for me there’s a theme to this year’s Giro… attrition.

You could say that’s always the case with Grand Tours, and you’d be right. Still, the slow burn of the start of this race, the long stages, the awful weather, the injuries, the disappearing form… this has felt tough. I don’t want to take anything at all away from Carapaz who has ridden with aggression and elan. He’s certainly not just the last man standing. He is the last man standing, though. With that, over to Elton to sing us out, and some of my abiding memories of the race as captured by Getty. 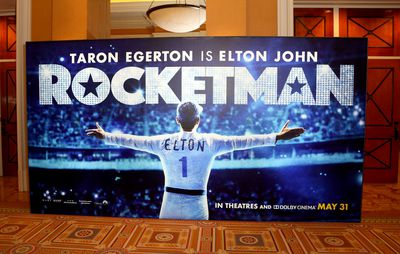 And there’s a cold lonely light that shines from you

Two photos here, and the first memory of this Giro is the God-awful weather. We saw buckets of rain and then an horrendous frozen descent of the Motirolo on a stage where the Gavia was impassable and riders were pouring tea over themselves to stay warm. Yuck. 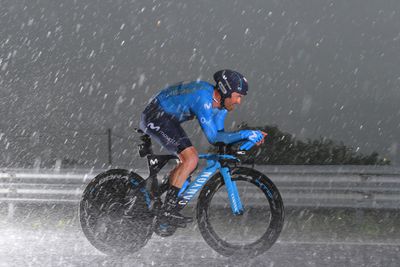 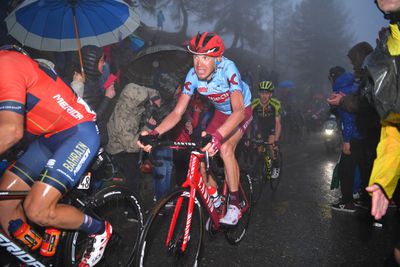 And did you think this fool could never win

Well look at me, I’m coming back again

I got a taste of love in a simple way

When it comes to wrecks, the crash that brought down Tom Dumoulin has to be mentioned. There were those who though that without him Primoz Roglic would walk away with the race. Then he just faded away. 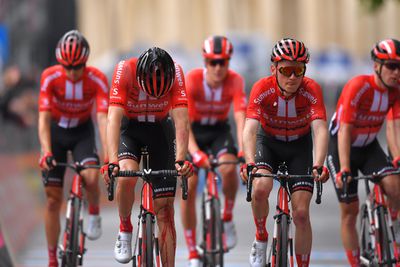 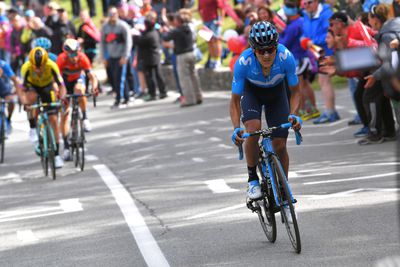 Cesare Benedetti is 31 and was riding in his seventh grand tour, this one in front of his home fans. He hadn’t won a race as a professional until he was the true survivor of a rough stage twelve into Pinerolo. 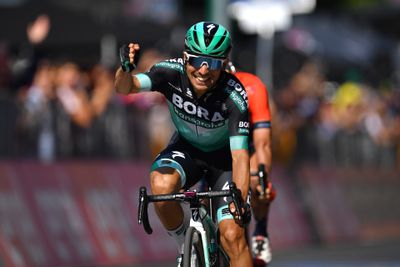 Pascal Ackermann must have come into this race with Sam Bennett on his mind, as he replaced the Irishman who won three stages last year and was on the form of his life. Bora made the right call, and Ackermann repaid them with two stage wins and the points jersey. The team’s enthusiasm all race was infectious. 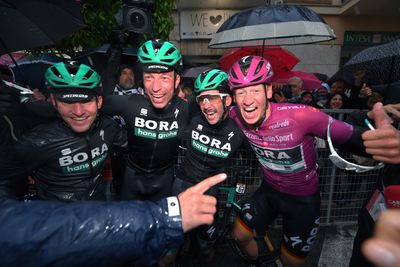 Once I never could hope to win

You starting down the road leaving me again

The threats you made were meant to cut me down

You know I’m still standing better than I ever did

Who have we got starting down the road? The breakaway, and there were lots of them this year. Normally they get cut down, but this year we saw them stay away in droves. You could hardly fail to root for Damiano Cima, juuuust holding off the finishing pack. I love this picture because you realise how quickly the stage winner was swamped after the line. 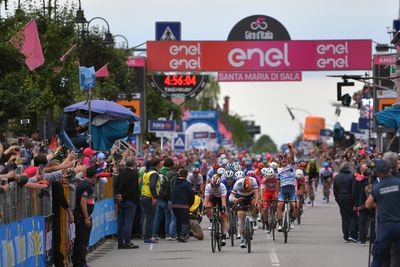 Pavel Sivakov was supposed to be escorting Egan Bernal to his first Giro win, but a misjudged descent in training altered that plan. Without Bernal on his mind, Sivakov rode for himself, and the Tour of the Alps winner demonstrated that he’s going to be a rider to reckon with in due course, grabbing a top ten and pushing Lopez in the white jersey competition. This is your periodic reminder that the former Baby Giro winner is still only 21, and doesn’t even look that old. 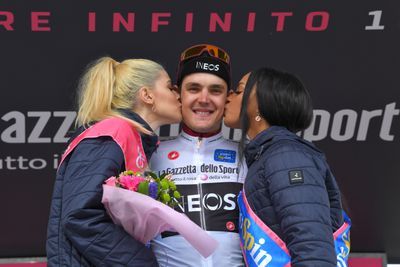 Vincenzo Nibali, who I called the grey man back on the first race day, has stayed nice and close and remains the man who’ll profit should something happen to Carapaz. He is still finding a way to be relevant and to squeeze every drop of potential from his career. Chris has called him the smartest bike rider he’s ever seen and I can’t argue. What a survivor he’s been. 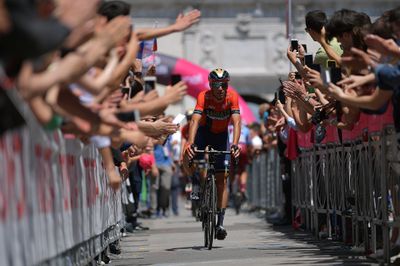 After a tough three weeks, Ecuador have their first Grand Tour winner, Richard Carapaz has climbed to the elite of the sport and we have a last man standing. He’s put on a wonderful show. Congratulations to him, to Movistar, and to all the finishers. Thanks to all of you for your company along the way. 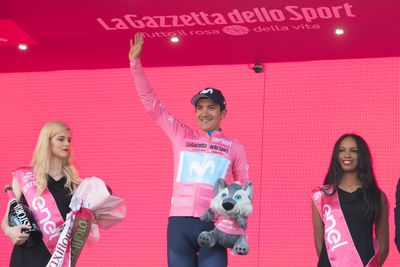