Latest News
Home /Blog/‘We expect things to get worse before they get better’: New Zealand reinstates lockdown on largest city amid 2nd wave of Covid-19

New Zealand has reintroduced strict quarantine rules in Auckland after the first locally-transmitted coronavirus cases were detected in the country in more than 100 days.

The three-day Level 3 lockdown started in the country’s largest city on Wednesday. Residents are allowed to leave their homes only for essential travel, such as picking up groceries, or if they cannot work remotely. Restaurants, bars and other non-essential establishments must be closed, and schools are not allowed to open. Meanwhile, the rest of the country has been put under Level 2 alert, which are less restrictive.

Prime Minister Jacinda Ardern announced the tightening of quarantine rules in Auckland after new Covid-19 cases were registered in the country for the first time in 102 days.

All four cases belong to the same family, which had recently gone on a tourist trip to the town of Rotorua, when one member was symptomatic. During their stay, they checked into a hotel and visited several places, including cafes and diners. Overall, authorities identified more than 200 close contacts of the family during that period. 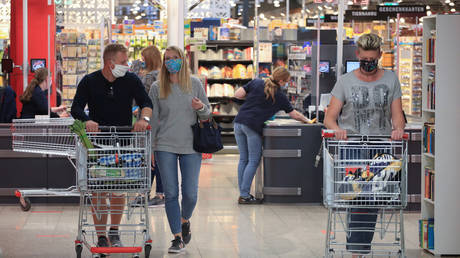 Director-General of Health Ashley Bloomfield said that the family has been isolated. Meanwhile, the number of positive Covid-19 cases has grown to 17 on Thursday. The majority of them were linked to the initial four cases in Auckland.

“As with our first outbreak, we do have an expectation that things will get worse before they get better,” Ardern said. “Modeling suggests that we will still see more positive cases. At this stage, though, it’s heartening to see them in one cluster.”

New Zealand has been hailed as one of the nations that had successfully gotten the infection under control, with less than 1,600 cases and just 22 deaths since the start of the outbreak. Authorities are now ramping up testing and contract-tracing, fearing that there may be more Covid-19 hotspots across the country.

We Called It! Guthrie Flipped…

Take a close look at…